Save Time; Save Lives with the Israeli Bandage

With almost 30 years of experience, PerSys Medical has consistently brought innovative products to market in a variety of fields, including software, telecommunication, and medicine. After narrowing its focus to the medical segment and becoming a distributor for several manufacturing companies in the U.S. and abroad, the company introduced its most-notable product to date: the PerSys Medical Civilian Israeli Compression Bandage, and it has become a mainstay on the battlefield ever since, offering the highest level of wound-site compression coupled with a multi-functional and cost-effective dressing for uncontrolled bleeding. 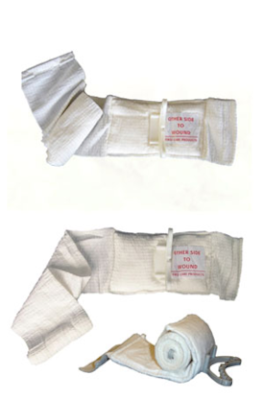 It goes without saying: Beginning treatment on a victim’s gunshot or knife wounds as soon as possible is critical, as doing so will drastically improve the victim’s chances of survival, particularly in cases of hemorrhaging. When every second is crucial, the PerSys Medical Civilian Israeli Compression Bandage saves time in an emergency situation because it consolidates the functions of numerous, separate pieces of equipment into a single, easy-to-use unit. Thanks to its versatile, user-friendly design and features, it is extremely useful to both the untrained lay person as well as the paramedical professional.

Available in several sizes, ranging from four inches to six inches, each with or without a non-adherent wound pad, the PerSys Medical Civilian Israeli Compression Bandage features a primary dressing, a patented, direct-pressure applicator, secondary dressing, and a foolproof, securing closure bar to securely hold the bandage in place. Should you ever find yourself without help and need to apply it to yourself, fear not: The PerSys Medical Civilian Israeli Compression Bandage is specifically designed to allow you to accomplish the entire bandaging operation independently, including, in certain instances, tourniquet application, even if only one hand is available. Additional features and benefits include:


For more information and to get yours, be sure to visit GideonTactical.com.
Posted by On Scene at 12:30 PM